Well, all my parts from trusty Dabs turned up for the weekend but still nothing from Happ (grrrrr…..). Therefore, I set to putting the new MAME-dedicated computer together.

I always put my own computers together (so much cheaper!) so this was no major task. The specification is as follows:

The only things I had to purchase were the Radeon graphics card (an absolute bargain at about £28), the soundcard (£12.50, though I’m sure my old AdLib one would have worked) and the case (£30). For the case, all you really need is the power supply but since they cost the same as a whole case I went that route. I also swapped it with the power supply from my main computer as I felt that that one – running an Athlon XP 2200 – needed a bit more juice; so the MAME Machine only contains a 250W supply.

Probably the cheapest computer I’ve ever put together! This system will have no CD-ROM or Floppy as I don’t see any requirement for them at the moment (may change my mind later!). I temporarily installed the ones from my main computer so that I could install the Windows 95 OS I had lying around but they’re now back where they belong!

I have a D-Link Wireless network setup for my main computer and laptop, so I’ll probably get another card for the MAME machine at some point to enable me to install updates.

Hey Saint….thanks for adding my link on Arcade Controls. I think I gave you a bad one so thanks for fixing! 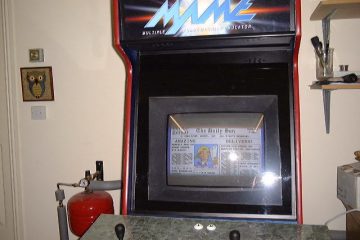 My Marquee retainer arrived from Happ Controls. I’m not quite sure how to fix it on yet, but until I get my marquee sign made I’m not going to worry about it too much. I also Read more…